I can't believe we haven't updated the blog since 29 November.  Here is a bit of a run down of what happened.

First off, Barb's parents arrived 4 December.  They were "lucky" enough to arrive on the hottest day since 2001.  It was 38 that day.  They almost died when they left the airport.  On the plus side, when it cooled down to 28 two days later they didn't think that was too bad.  We toured around Brisbane for a few days.  (See Pics)

Next up was Barb's grad ball.  (See Pics)

The next week we drove up to MacKay to see where we might live.  We took the slow trek north, heading through Bundaberg, Tin Can Bay, going to the reef at Lady Musgave island, heading through Rockhampton and finally arriving in MacKay four days later.  The next day Barb & I went house hunting while Rudy & Susan sat on an outdoor patio drinking coffee.  We put in two applications for rental houses, but haven't heard back yet.  We then drove back to Brisbane over two days.

Next up was Barb's actually grad ceremony  (See Pics) 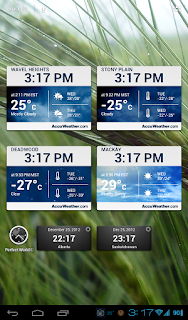 The last few days have involved less driving.  We went Yatala for pies (meat pies) and a saw Skyfall and the drive-in.  We went to Stanthorpe for a couple days basically to eat.  Went to Queen Street mall, Carols by Candlelight at our church and saw the lights at Stafford Heights Baptist.  Christmas Eve we went to Bulcock Beach for the afternoon and in the evening Barb made a delicious turkey feast.  Christmas morning we had the required Eggs Benedict before went off to church.  In the afternoon we opened presents and nice lunch of cold cuts, prawns and salads.

This morning we kicked the Klassen's out of the warm and sent them off to the land of snow. It will be about 50degrees colder when they arrive in Edmonton tomorrow.

All in all it was a great visit.  I think we may be having them back as they mentioned a few times that "next time we should...".
Posted by Unknown at 21:22 No comments: Links to this post