It's Crazy. Everybody knows Pizza is a FRUIT! 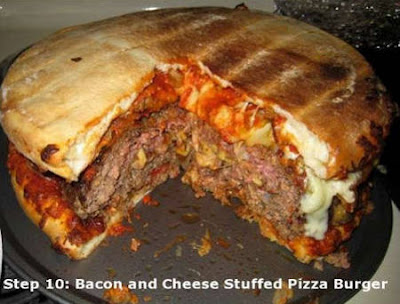 This is so sad:

"American lawmakers have ruled that the amount of tomato paste in pizza sauce means that pizzas can be counted as a vegetable. The bizarre move, which was decided in a vote on the annual spending bill for the Department of Agriculture, happened for purely political reasons.

The crucial bill had oversight over subsidised school meals, and the department was seeking to restrict pizza, chips and starchy vegetables from the menu for school children in a bid to combat child obesity.

MSNBC reports that politicians had been lobbied heavily by the frozen food industry who didn’t want to see a major revenue stream cut off given how often pizza is found on the menus of school canteens in the US.

School meals subsidised by the government are mandated to include a certain amount of vegetables and the Department of Agriculture’s plan would have pushed pizza-makers at least partly out of the school lunch business.

The salt industry, potato growers, and some conservative politicians who said that the federal government shouldn’t be involved in telling children what to eat, also lobbied against the change.

After some debate, Congress voted that anything containing two tablespoons of tomato sauce can be labelled a vegetable, putting pizza into the vegetable category. The Obama administration is fighting to make school lunches healthier in the face of a growing obesity problem across the country."

As my friend Reade commented, " there was no debate but rather just a pronouncement. The power to impute vegetableness upon things that may contain some vegetables is a long standing desire and "power" of the state."

It is so sad that childrens' health is second to lobbyists. And yet another generation will be totally confused on what they should and shouldn't eat, trapped in self loathing because they can't seem to escape their obesity when they think they are eating their vegetables. Sad.

Posted by Barb at 07:55 No comments: Links to this post

Some hellish fire starters today at the Woolworths.
Barb finished her last exam for the year on Thursday.  Since she didn't have to do any studying, we had a lovely day out together.  This morning we met Robin for breakfast.  Then we went to the library to hang out and read. Next off to Woolworths where we picked up some burgers to BBQ for supper. Now we ate sitting on the balcony after eating some burgers and fries.
The Video-Ezy near the grocery was selling previously viewed movies, so we picked some up.  Tonight we are planning to watch "The A-Team"
Tomorrow our friend Barbra is arriving from Canada at 10am. It will be great to see her again. 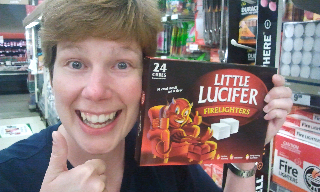 Posted by Unknown at 17:41 No comments: Links to this post 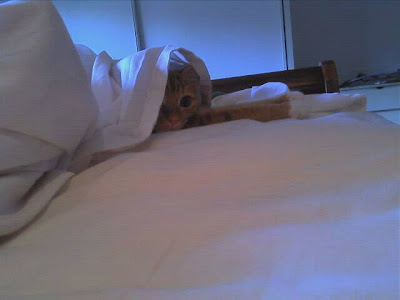 Here is Rosie hanging out with me while I cram for my surgery final. We are hiding in in the bedroom, as it is the only room in the house with air conditioning. It is currently 30 degrees and 70% humidity. You can feel yourself roast if you hang out in the sun!
Published with Blogger-droid v1.7.2
Posted by Barb at 10:58 No comments: Links to this post 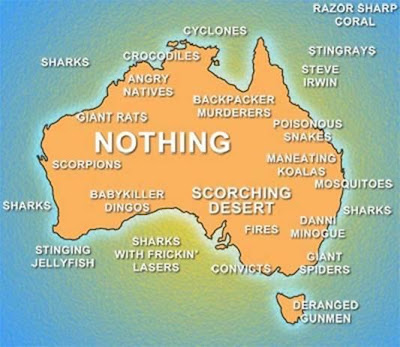 These were posted on an Australian Tourism Website and the answers are the actual responses by the website officials, hehehehe

Q: Will I be able to see kangaroos in the street? ( USA )

Q:I want to walk from Perth to Sydney - can I follow the railroad tracks? ( Sweden )

Q: Are there any ATMs (cash machines) in Australia? Can you send me a list of them in Brisbane, Cairns, Townsville and Hervey Bay ? ( UK )

Q:Can you give me some information about hippo racing in Australia ? ( USA )

Q:Can you send me the Vienna Boys' Choir schedule? ( USA )

Q:Are there supermarkets in Sydney and is milk available all year round? ( Germany )

Q:Please send a list of all doctors in Australia who can dispense rattlesnake serum. ( USA )

Q:I have a question about a famous animal in Australia, but I forget its name. It's a kind of bear and lives in trees. ( USA )

Q:I have developed a new product that is the fountain of youth. Can you tell me where I can sell it in Australia ? ( USA )

Q: Will I be able to speak English most places I go? ( USA )

A: Yes, but you'll have to learn it first

Posted by Barb at 11:11 No comments: Links to this post

Today was just a regular kind of Wednesday.  At school today I installed windows XP twice, converted a pdf to a Word document, and started planning how to spend $33,000 on computers.  The principal wants a dozen iPads, but the rest is sort of up to me.  First off I'm getting a set of three portable hard drives so we can have regular off-site backups.  Also looking at a couple of interactive whiteboards with projectors and laptops.  If there are any teachers out there, what things would you like from your IT department?  I can't help you, but maybe I can make things better for another teacher. (Hymba Yumba)
Tonight was our life together group (care group, Bible study).  We started off taking about Ephesians chapter 4, but ended taking about how we each ended up at Windsor Road Baptist.  It was also pointed our that we only had one Australian in the group.  We also had one Englishman, two Canadians, one Chinese and one German.  We do go to a fairly international church, but that was more international than usual.
It's now almost 11:30, so I should go to bed.

Posted by Unknown at 23:20 No comments: Links to this post 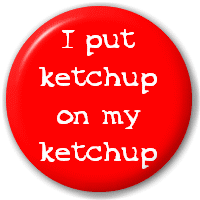 I think Australians believe that ketchup (or tomato sauce, as it's called here) is a scarce and precious commodity. Before I left Canada, I ate ketchup like a truck driver. On everything. Within reason (ketchup is not nice on breakfast cereal or Thai food). Aussies seem to be pretty content without it, and it's not a part of a restaurant's table set up (even burger joints). You have to ask for it. And IF they have it, you will be charged extra accordingly. This tends to be especially expensive with takeaway food. For example, I had a cup of tater tots at the hospital cafeteria. $2.00. Add ONE package of ketchup= $0.60. I was hoping for 2 or three packets, but I guess not! I have to say that I've gotten used to it, though. A bottle of ketchup lasts a lot longer in the fridge than it used to. That's probably a good thing, because according to Canadian standards a condiment must be at least 40% sugar to be called "ketchup". Otherwise it is labelled "tomato condiment". And the salt content is usually not helpful to your cardiovascular health either.
Nerdy moment: Did you know? Tomato ketchup is a psuedoplastic—or "shear thinning" substance—, which can make it difficult to pour from a glass bottle, though it is not a non-Newtonian fluid. Often, the neck of the bottle will appear to be blocked. A common method to getting ketchup out of the bottle involves inverting the bottle and shaking it or hitting the bottom with the heel of the hand, which causes the ketchup to flow rapidly. This technique works because of how pseudoplastic fluids behave: their viscosity (resistance to flow) decreases with increasing shear rate. The faster the ketchup is sheared (by shaking or tapping the bottle), the more fluid it becomes. After the shear is removed the ketchup thickens to its original viscosity.

P.S. Why do hospitals sell food (ie deep fried, high salt, high sugar) that put at least half the patients in hospital in the first place??