It's Tuesday and already and interesting week.  On Monday I started a second job.  I am working one day a week at the sister school to where I work now.  (Hymba Yumba).  It's only a 45min drive from home, but unfortunately it is almost a 2 hour bus/train/bus commute. 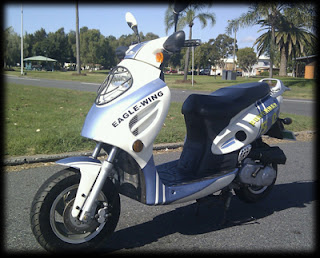 Which brings me to my second item.  I just picked up a 'new' scooter.  I am a bit surprised Barb actually let me get a motorbike.  On the plus side it makes getting to work much easier and it is actually cheaper than public transit. (It's also kinda fun to drive).

Today also seems my day to be losing things.  I left my sunglasses on the train when I went to pick up the scooter.  Then on the way back I lost my cell phone somewhere between Chermside & Wynnum.  I back tracked part of the way to look for it, but I think it is gone for good.

As luck would have it I at least have a spare phone.  Just last week Optus was having a deal where you can get a Samsung Galaxy Tab and Galaxy S for a two contract of $59.  I already pay $49 for my current phone plan so that worked out to be only $240 more.  I've wanted to get a tablet for a while now, but we didn't really have the extra cash to spend something that is just a toy.  I was planning on keeping the Tab and then selling the 'S'.  As long as I could get $240 for the phone, I would be getting a free tablet.  Now that my old HTC HD2 is no more, I now have a Galaxy S.

And finally, as I write this my mother is in the Grande Prairie airport waiting to board an AirCanada flight to Calgary, then Los Angeles, and finally Brisbane.  She will be visiting for a month.  It will be good to see her, plus she is bring 'real' marshmallows and ice tea mix among other goodies :-).

Posted by Unknown at 00:34 No comments: Links to this post

when life throws you homesickness, wing back a few perogies! (home made and awesome!)

Rob and I were watching Corner Gas the other night, the episode where Lacey wins the perogy eating contest. Perogies are endemic to the prairie provinces, but scarce as hen's teeth in Australia. (and btw, the computer's dictionary wanted to replace "perogy" with petrology or peroxides. Dictionary just got SCHOOLED) The thought of Corner Gas and 'rogies got me a little homesick. And then I thought, "but I have an AWESOME recipe!" So Sunday afternoon, I made about five dozen and invited some folks from church over for supper. SOOOOO GOOD. After mentioning the episode on Facebook a few people asked for the recipe, so here it is!

beat together. Add in:
4 1/2 cups flour
and knead into an elastic dough. Roll out a handful at a time to 1/2 cm thick. Use the biggest glass you own to make circles.

Filling:
3 cups mashed potatoes (complete with butter and milk)
finely chopped cooked onion
as much cheese as is reasonable
Options include adding chives, bacon, or sauerkraut (blech. I am not a fan of kraut)

Put in about tsp-tbsp of filling in center, fold over and pinch the edge together (a little water will help seal the dough edges). Throw all those puppies into a big pot of boiling water, and let them go for about 5 minutes, or until they all float. Serve with caramelized onions, farmer's sausage, chives, bacon bits and sour cream or more butter. They freeze well. 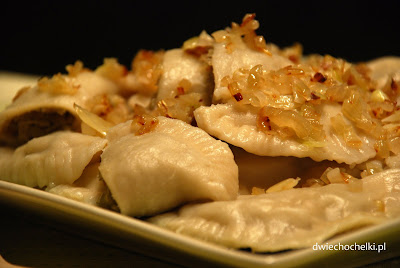 They are NOT low fat or low calorie. But they are pure love in a dumpling, to quote a friend.

P.S. D'you ever notice how pretty much EVERY culture has some form of dumpling? Crazy. http://en.wikipedia.org/wiki/Dumpling
Posted by Barb at 21:25 2 comments: Links to this post

Yes I have tried Vegemite. No, it's not very nice. More for my Aussie buddies, then!