I love a good storm and yesterday we had a rainstorm track through Brisbane.  I got a few video clips of the rain we got at the school:

Posted by Unknown at 13:24 No comments: Links to this post

How to drink Coffee in Space...

You never know when you might need to know how to drink your daily fuel in a weightless environment. Yes, I am studying too. Which is why I'm thinking about coffee. And differential diagnoses for rectal bleeding. This exam can't be over too soon.

Posted by Barb at 22:52 No comments: Links to this post

Barb is almost done her first two years of medicine. That means that the Half-Way Dinner is just around the corner. It is a very fancy affair, a tuxedo worthy affair even. But instead of a tux I will be wearing a dress kilt. I ordered a kilt and it was delivered today. This is an almost complete outfit. I still have to pick up a tux shirt and bowtie. The proper Scottish socks are still in the mail and should be here shortly.

And just make sure I didn't clash with Barb's dress

Posted by Unknown at 18:28 No comments: Links to this post

This is possibly the most awesome shoe in existence. That no one can actually wear. That is all.
Posted by Barb at 19:35 No comments: Links to this post The school I work for just got 9 new computers Thursday. I've never setup 9 new computers before. It has been interesting because there are on a domain and I have to migrate setting, install software, etc. It is fun at this job because I get to try new stuff.
Early next month the students are having a drama production and i get to do sound effects, help with lighting & props and generally just be a techie.

BTW:  There is a new school starting next year that I have done a bit of work for.  I've made the placeholder website for it at www.HymaYumba.qld.edu.au

Posted by Unknown at 12:22 No comments: Links to this post

Barb has been on several trips with the fellow med students to rural hospitals and such all around Queensland.  For the first time I was able to tag along.  It was a wee bit of an adventure.


First off, we found out about half way there that we we supposed to bring fancy clothes for the supper that night.  Barb had to pick up a dress and I a tie at Target in Toowoomba.  We changed at McDonalds.  After the dinner and keynote address, we found out that we were supposed have brought a sleeping bag as we were staying a Camp Toowoomba the first night.  Lucky Brody brought a few extra and Barb & I shared one sleeping bag.

The next day was the drive to Stanthorpe.  We we supposed to go to the horse races that day, but the excess rain canceled them.  Instead we went on a tour of the wineries in the area.  We ended up going to three wineries; had lunch in one and dinner at another.  We also stopped for dessert at "The Bramble Patch".  All in all a very pleasant day.

The photos for the weekend are now up at the website: 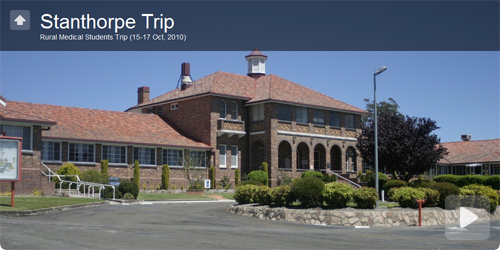 For those of you that regularly check out our blog, you may have noticed it looks very different.  That is because we have switch from our web providers blogging software to Blogger.com.  It gives us (and by that I mean me) more control about the layout and look of the blog.  I can now make the blog look the same as the rest of the website.  The conversion went fairly well, but some of the old blog posts lost there attached pictures.  I'll try to correct that in the next little while.  So enjoy the new blog.

Rob
Posted by Unknown at 11:08 No comments: Links to this post

Last week was SWIM's AGM. This is the current exec (which Barb is a part of) and next years exec too. 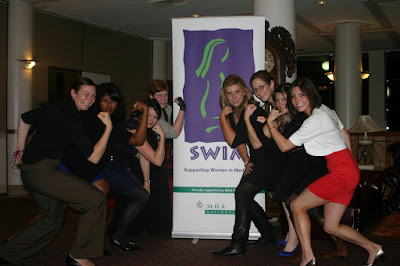 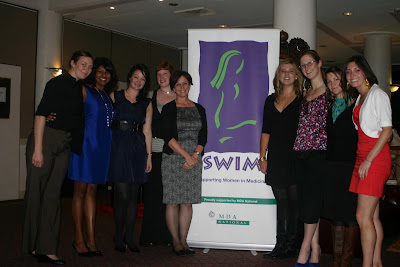 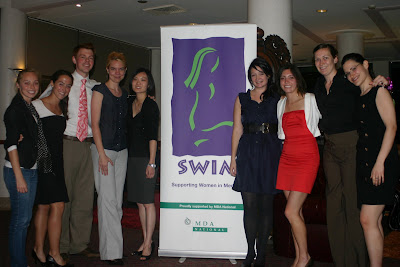 Posted by Unknown at 04:33 No comments: Links to this post

Thanksgiving, with so much to be thankful for!

Turkey is not extremely common in Australia. And Thanksgiving is entirely a North American invention. The interesting bit is that Canada may have started celebrating gratitude 43 years before the pilgrims hit Plymouth Rock in 1621. Martin Frobisher had been exploring the Northwest Passage, which had sent many an explorer to their death. After arriving safely back in Newfoundland, he had an official thanksgiving ceremony, in 1578. Isn't history great?

OK, shiny thing. I was distracted. I invited as many (and more) than our apartment would hold, and set into planning. My Aussie guests were genuinely intrigued, as most had heard of the holiday, but had never celebrated it. Do you dress up? Do you bring presents? Is this about pilgrims? It suddenly struck me that there is never an end to the growing season here. In Canada, everything that will be food for the year is off the fields by October, hence the Thanksgiving for the harvest. As a child of farmer's children, the farm cycle is familiar and has a comfortable rhythm. Here bananas and mangoes are local produce, and it never gets cold enough to signal the END of the growing season. It was a moment of culture shock for me. The second shock was the bird. In order to procure a turkey, I needed to make arrangements with the local butcher 2 weeks in advance, and it was flown in (not under its own power, I assume) frozen from who-knows-where. It also cost $75.00!!! Yikes! Nevertheless, we returned home with our bird and a large bore needle and syringe from the chemist. I injected him with butter all over, and into the oven he went. 5 1/2 hours later, 16 guests arrived, each contributing to the feast, including made-from-scratch pumpkin pie. It was spectacularly delicious. A good time was had by all, even though it got very cozy. There are pictures on the website, courtesy of Rob. Thanks, indeed! God is good.


I am now employed. I work for Chermside Medical Centre as a casual receptionist, and so far, so good. It's good to know I will have something to do over the Christmas break, and making some income won't hurt either.
Posted by Barb at 19:24 2 comments: Links to this post

Here I am on my day off.  Normally I work Tuesday, Wednesday & Thursday, but because school just started up this week I went to work on Monday to deal with all the start of term emergencies.  This week I will be on Monday, Tuesday and Friday.  So far I am enjoying working at the school.  Everyday is different and I get to work on a variety of things from setting up new network users to creating websites to moving furniture.  They are in the process of starting a new school for next year, so I have been able to help with that.  So far, I've designed business cards, helped with the brochure, made a promo video and in the process of making a website.  The news school is called Hymba Yumba.

I've also been able to play with graphic arts with our church.  I've been video taping the sermons, editing and uploading them.  You can see it at:

I have to admit the seasons here are very confusing for my Canadian head.  There is not a huge change from winter to spring to summer.  I know it's October, but it doesn't "feel" like October; no fall leaves, no slowly getting colder.  We are having a Thanksgiving dinner here on Saturday but it does seem like Thanksgiving time.  Also, we saw the first of the Christmas goodies at the grocery store yesterday; candy canes, fruit cake etc.  Christmas is a summer holiday here, no snow, no snowmen, no walking out into the bush to cut down a tree.  I guess eventually it will all make sense.

Speaking of Thanksgiving, we are planning to have a big meal here on Saturday.  We ordered a 7kg turkey from the butcher, and invited some friends over.  Barb got a bit carried away and now we have about 16 people coming.  It will be crowded in here.  Should also be a blast.
Posted by Unknown at 00:30 No comments: Links to this post