I don't know why I care so much. But the story of Ned Kelly, a notorious bush ranger, hanged in 1880, intrigues me. His story weaves itself into the Australian mythology and psyche even today. There lingers a distinct mistrust of authority and hatred of bureaucracy, as well as an admiration for independence. I absorbed the whole Wikipedia article (which afterwards led me on an evil 3 hour path of interesting connections, when I should have been studying pharmacology). I read that the armour that was bush-forged and worn by Ned was at the Victoria State Library. So naturally, when it was decided that our holiday would include Melbourne, I wanted to see it for myself. I became obsessed with it, really. I HAD to see that armour, and thought about it often. We arrived in Melbourne on Monday morning, and made our way to the Library. 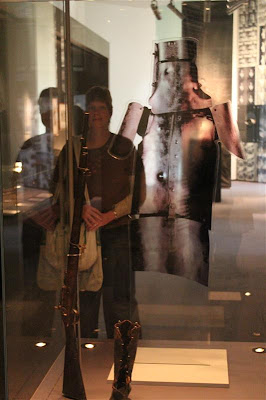 Imagine my disbelief and disappointment when we arrived at the gallery and all that sat there was his gun, a boot, and a plastic cutout of the armour where it SHOULD have been. There was a small plaque which apologized for the incovenience, but that the armour had been lent to Canberra (National Museum) until August 5. This is not inconvenience, this is unbelievable. I had just driven 1700 kms to see this and you GAVE IT AWAY???!!

It just so happened that the next day we were to catch the ferry to Tasmania. Unfortunately our car and Royal Auto Club Victoria had other ideas. The battery was very dead when we arrived back at the car to drive to the ferry terminal. RACV (the equivalent of RACQ or AMA) took THREE hours to come to our assistance. Thus we missed the ferry. At this point we had the choice of attempting to fly out to TAS the next day, or start back to Brisbane. 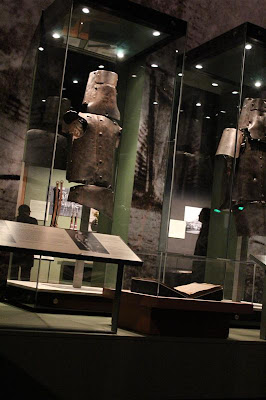 We decided the later would be cheaper. So we wound our way from Melbourne via the Snowy mountains to Canberra. Mom Bradshaw and Rob humoured me, and we went to the National Museum. I saw the armour of Ned Kelly. I am satisfied. I don't know why I care so much. But I do.

PS. I am now reading The True History of the Kelly Gang by Peter Carey. Delicious book. My brain is going "Om nom nom nom"
Posted by Barb at 20:58